Welcome to the insightful slurrings of a beer lover and occasional homebrewer...

New England. It's newer than England but it’s just as bloody good. In fact for the everyday tourist I’d almost have to say it blows the old one out of the water. One of the best regions this little blogger has been lucky enough to visit.

What’s so special? There are so many things it warrants a list. Yeah that’s right, a fricken list:

As you can see there is something for everyone in New England, but the above could really just apply to Maine itself. Maine is very much the amber coloured jewel in New England’s crown. As good as those lobsters are, or how novel it is to explore Stephen King’s home town (it’s not stalking alright), you’ll be disappointed if that’s what you want to read about. Go Google that stuff. This is a beer blog baby!

Lets begin with the fact that Maine has its own published Beer Trail! Thanks to the Maine Brewer’s Guild, you can get to every brewery throughout the state. We failed. We just couldn’t get to them all but man it was fun trying! 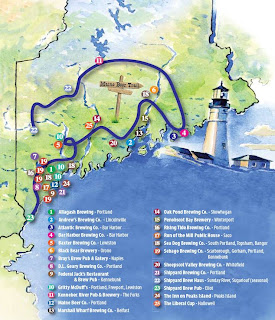 Here are four (or so) of the highlights…

Gritty McDuff’s
Gritty’s is Maine’s first brew pub since the days of prohibition. Yeah it’s a pub, but it’s an active brewery and gets the balance between the two just right.
Location – Portland
Best Beers – 21 IPA, Red Claws Ale, Halloween Ale (yep for a pumpkin style beer Gritty’s get it just about right!)
Highlights – Views of Casco Bay from the bar, brewery shop next door 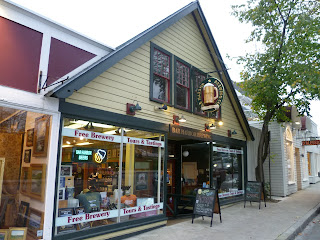 Atlantic Brewing Company
Set in 10 acres of pine woodlands, Atlantic Brewing is one of the first things to welcome you as you leave the mainland and drive over the bridge to Bar Harbor.
Location – Bar Harbor
Best Beers – Blueberry Ale (better than it sounds!), Real Ale, Coal Porter
Highlights – Free tastings, decent shop. Real highlight was asking for and receiving free posters, labels and stickers! Very easily pleased after a couple beers I am...

Belfast Bay Lobster Ale
Okay it's not a brewery, but it is brewed by Belfast Bay in Maine and it's good shit. Real good shit. I drank a lot of its amber red goodness and therefore it deserves its own mention. Australia you officially suck for not making it available to me whenever I want it.

That’s New England folks! Or at least Maine. Hopefully I haven’t offended the brilliant city of Boston or four or five other awesome states by just concentrating on Maine. But to them I say too bad! The beer drinking experience in Maine was just THAT good it gets a blog.

Stay tuned for the next installment of Short & Stout Slurrings. Who knows what that will be about…I sure as heck don’t!

Todd H Sweeney
All round beer enthusiast. Lover of craft beer, visiting microbreweries and searching for that elusive 'best beer in the world'!